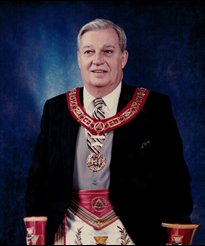 MW and ME Earl J. Hino, Jr. was born in Buffalo, NY on August 14th, 1933. The son of Earl J. and Adaline Hino he married Barbara P. Cawley, and had one daughter, Holly Ann Hino. Companion Hino was an enthusiastic sportsman, a former intercollegiate wrestling champion and an award-winning rower. An avid dog handler, he held a Professional Handler’s License from the America Kennel Club. He was employed by the Spaulding Fiber Company as a Manufacturing Manager.

He was High Priest of Buffalo Keystone Chapter No. 71 in 1966, and Grand Representative to North Dakota from 1968 -1971. In 1981 he became Grand High Priest of the State of New York, throwing himself into the task – as he did in all his Masonic undertakings – with an enthusiasm and drive which was hard to match. Following his term as Most Worshipful Grand Master from 1995 – 1997, he retired to California, and could usually be found sitting by his pool with a cold beer in hand. He departed this life on February 23, 2019.

Perhaps an appropriate way to honor his memory is by a comment and a short poem he himself recited at the Memorial Address when he was Grand High Priest in 1892; words which he himself exemplified by his life:

“Early in our Capitular careers, we received the lesson of the mark. We should be able to put our mark upon life as a testimony to our labors and our pride of workmanship. The mark of our work is often hidden to any but the careful searcher, but it must be there. We have a responsibility to make our marks upon the world through service and devotion to both God and man.

“Edwin Markham, the famous poet, expressed it in this manner:

“There is a destiny that makes us brothers;
None goes his way alone:
All that we send into the lives of others
Comes back into our own.

I care not what his temples or his creeds,
One thing holds firm and fast –
That into his fateful heap of days and deeds
The soul of man is cast.”

Well done, good and faithful servant. Enter into your reward in the Holy Temple above!

Do you really want to delete card?

This process cannot be undone.

Card has been deleted successfully.